My  daughter occasionally writes an editorial column for our local newspaper.  The column is called “through the eyes of a 4th grader”. All my kids spend much of their waking hours in the outdoors of Northern Michigan.  In one article she wrote how the season’s impact our life, both the chores and play we do daily.   She described the summer and fall as busy months.  We have a large garden and produce much of our own food during these months.   Harvesting and food processing are timely endeavors to say the least.   They keep us off social media, outside and active.  We also heat our home with locally grown dead-fall wood and spend a lot of energy cutting, hauling and stacking that wood.   She explains that our winter is a time of play.   Outside is where we play.  This includes snowshoeing, skiing, sledding, snowball fights, ice skating and fort building.  The snow always arrives, sometimes sooner than later.   The snow quiets the land and rejuvenates it.  It does the same for us.  We focus on what falls from the heavens rather than the toils of the soil. 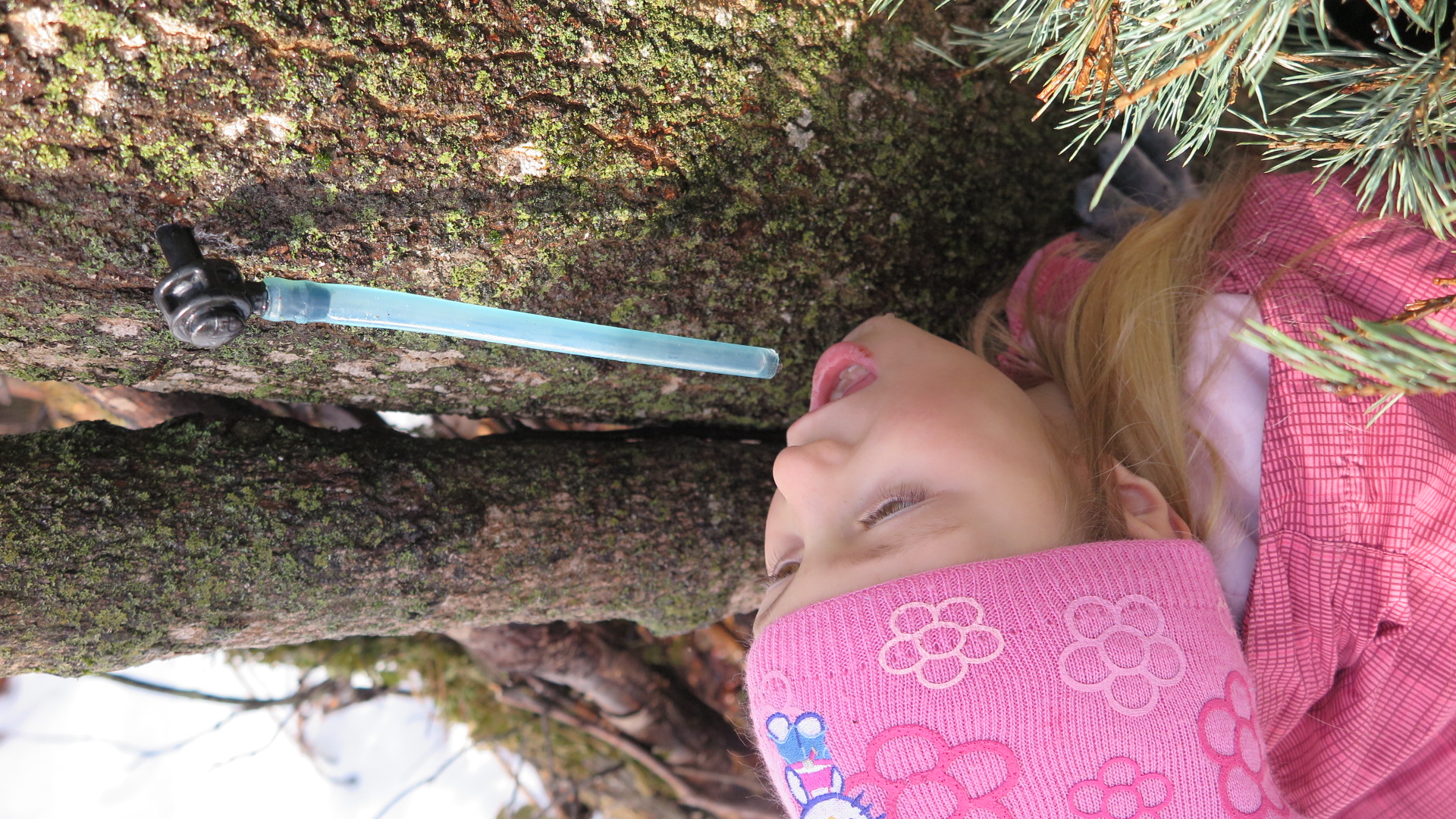 Spring by far can be the busiest.  First with maple syrup season, then with seedlings and finally planting.  Living by the seasons, requires an ability to adapt.  Nature dictates your schedule rather than any human contrived mechanism.  This year it has been a mild winter.  Spring came fast and then slowed down, regressed a little.  Although without warning it will be summer.    Child-rearing is like the spring.  It happens fast, never predictable and as soon as you feel caught up, the season changes.  I always wish I’d planted one more row of seeds or another fruiting bush or tree.  When one is raising children it helps to stay in-tune to natural processes, rather than always trying to stay on schedule.   Yes, sometimes opportunities are missed.  However, the natural process will dictate the schedule.   Kids develop when the conditions are right.  Just like the first wild leeks popping up through the decaying leaves.  Just like the maple sap starting to run.  It will happen, but not always exactly when you expect.   Nature has a science that is predictable, but learning to adjust to all the variables is a practiced art of living by the seasons.

My kids have adjusted to seasonal living.  Maybe because they do not know anything else.  Maybe I am the one that needed to adjust.  Children seem to live instinctive.  Just like when a newborn is immediately put on a mother’s chest after birth, he instinctively searches for nourishment.  The infant child raises his head, smelling and feeling for the nipple in search of food.    I had to learn to tap trees.   As a year-round employee, I seasonally watched a Kensington Metropark interpreter demonstrate the labor intensive process used by Michigan’s native people to boil down the sap to a syrup with hot rocks.    I started tapping my one, large maple tree on a Ypsilanti, Michigan city lot.   A year or two later, I got my dad involved and tapped a small woodlot of large black maples once tapped many, many years ago adjacent to his 100+ year old country home on Nichwagh Lake in South Lyon, Michigan.     We always let the children taste the fresh maple sap.  They love the subtle sweet maple flavor and love to let it drip into their mouths.  Now, my husband and I own thousands of sugar maple trees and tap about 40 to get our yearly supply of 10 gallons of Michigan made 100% pure maple syrup.

Nothing about making maple syrup is easy.  Now when I see it sold at the local farmers’ market, if I didn’t already have plenty, I would gladly pay the $20.00 a quart.  Making maple syrup isn’t about the product, it is about the process.  I would compare it to breastfeeding.  The process may be even more important then the food.  Even after 20+ years of studying human nutrition and diet, I have certainly not found the perfect food or diet, for that matter.  Although one could easily make a nearly indisputable argument that for a human infant, breastmilk is the perfect food .   However, maple syrup is just sugar.  Maybe it has some micro-nutrients in ample quantities, but it is concentrated glucose.   A past supervisor and fellow diabetes educator nearly fell over in disgust when I told her I produced maple syrup.  For our diabetic patients, a traditional lumberjack breakfast of maple syrup and pancakes would surely put them in severe hyperglycemic overload.   Diabetes was unknown to Native Michiganders when they relied on maple syrup as part of their traditional diet.   They ate it out of necessity and in appropriate quantities to supplement a variety of grown, hunted and gathered foods.    They also breastfeed their children exclusively during infancy.  I do believe their children like mine loved to let the sweet maple sap drip into their mouths every spring and had ample opportunity to appreciate all of nature’s blessings.

The All Natural Drink

Without Blessedfeeds, I truly believe I would have quit breastfeeding. . .

Breastfeeding when you are in pain and exhausted is rough. Debby was never judgmental and very supportive. With her assistance, I met my goal of giving my son breast milk exclusively for the first three months. My new goal is six months.